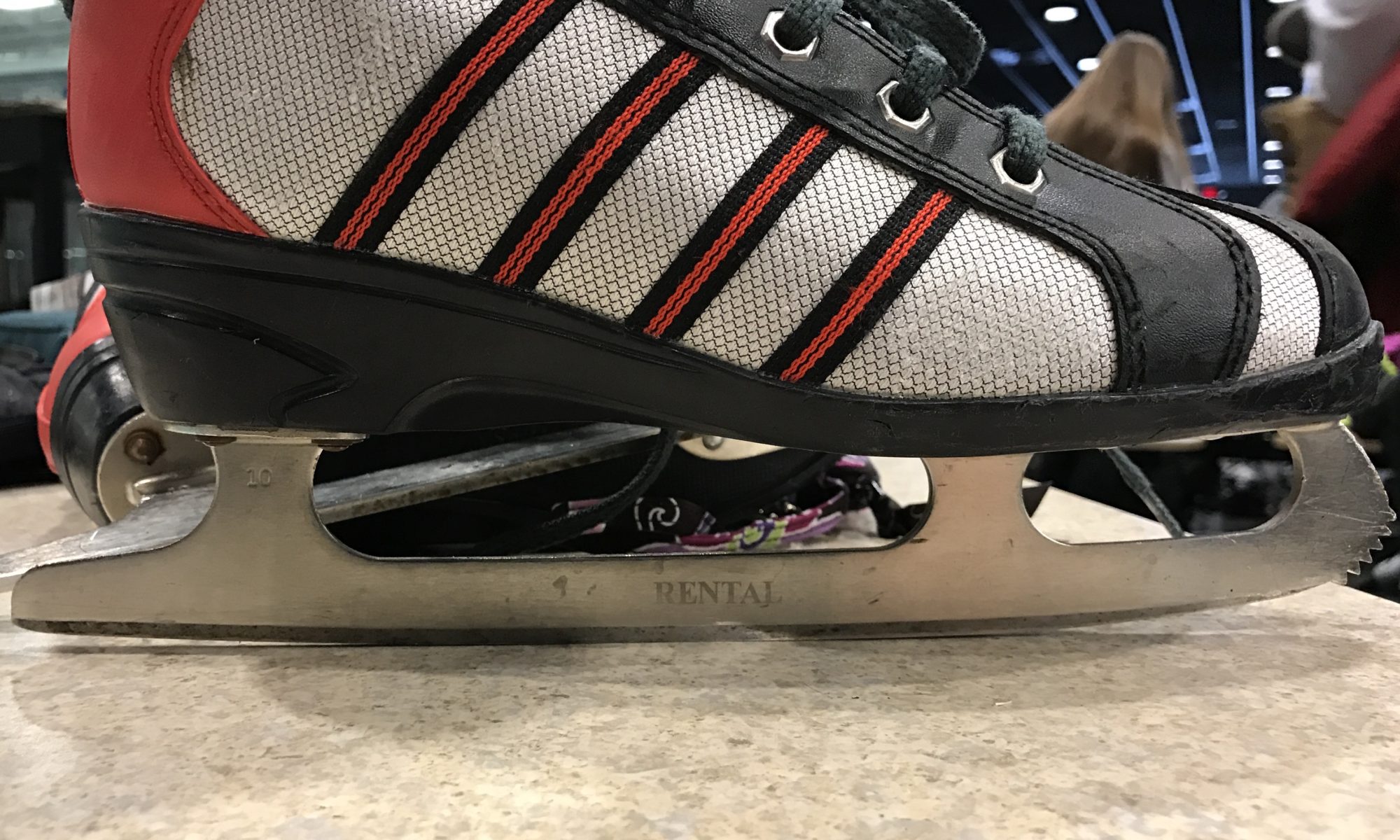 Once of the questions I struggled with when my children started ice skating was when was right to consider buying skates. If you’re new to ice skating, you’re likely wondering the same thing too, so here are my thoughts on the matter. 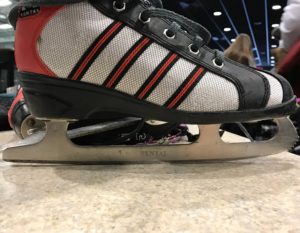 The summary is that rental skates suck. That’s not to say that you can’t have terrific fun wearing them, but they’re designed for casual skating only. They are shaped fit as many different foot shapes as possible, to accommodate the thick, warm socks that casual skaters might choose to wear to the ice rink, and to last a long time. They’re generally what are described as ‘soft skates’, which means they don’t have an awful lot of support (and are thus not safely usable for any kind of jumps and spins). I also don’t see the skate blades being dried off when rentals are returned, and the results are inevitable: 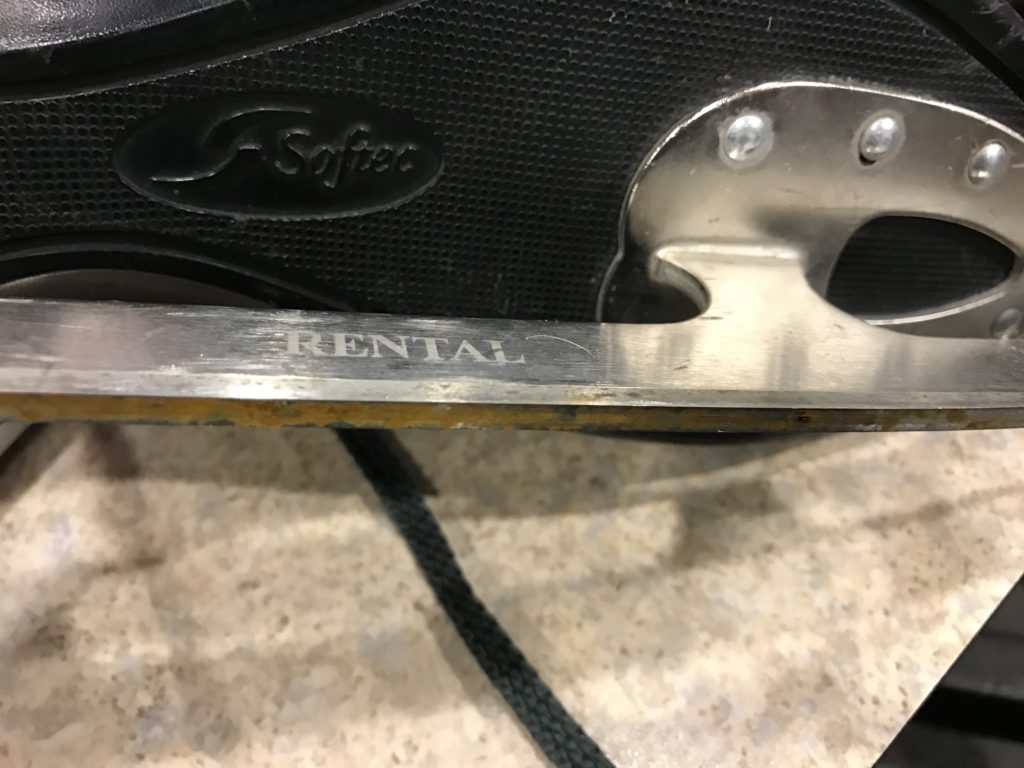 In this case, the state of the blades is less than stellar as well: 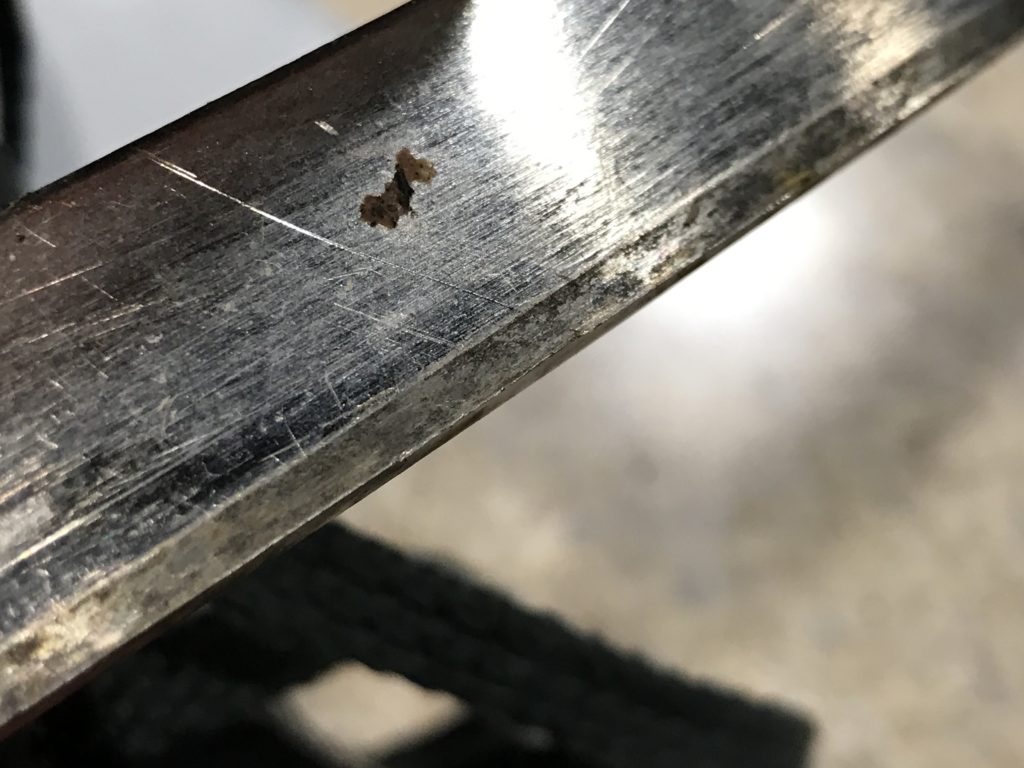 None of these attributes make rentals skates great for serious skating. However, when you or your child are starting out with skating, they are perfectly adequate. After all, who wants to drop money on brand new ice skates when there’s a chance that the child may not enjoy ice skating after all and will change their mind?

My policy was that when my children started following the Learn To Skate USA Basic 1-6 courses, I would not buy them skates at first. They started somewhere around February this year, and I spoke to their coaches to as them to advise me as to when they thought it would be helpful for my children to have their own skates. I also reckoned that this would give me maybe 3-6 months to find out whether they were engaged and enthusiastic before I made an investment. The kids did well using rental skates, and they were in good company; most of the other children in the lower Basic levels were also skating in rentals.

Buying Your Own Skates

Around the time where my oldest skater at the time (12 years old) got to somewhere around Basic 4, their teacher approached me as promised and said that this would be a good time (if possible) to consider getting them skates. Being reasonably well built and getting heavier and taller by the day, it was particularly important to find skates that would have reasonably firm ankle support.

The subject of which skates to buy is such a huge one that I wouldn’t even dare to start advising to go for one brand over another because it’s a very personal choice both in terms of budget, features and options. I will comment that most of the skaters I see at this level end up with Jackson or Riedell skates, but that may be a regional thing as much as anything else.

For the purposes of transparency, I am happy to share that I ended up selecting Jackson Ultima Freestyle/Aspire figure skates for my son. 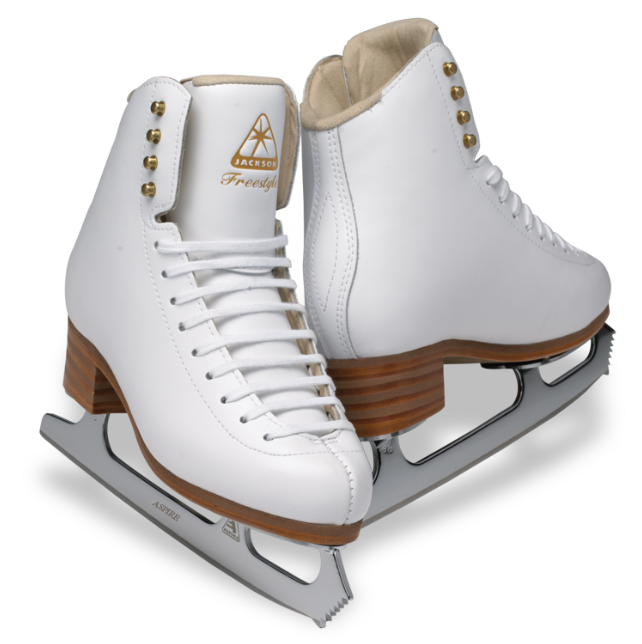 While I was emptying out my wallet for one child it seemed rude not to finish the job and also get younger sister (aged 9) her own skates as well, as she was in Basic 3 and learning quickly. She ended up with the slightly cheaper Jackson Ultimate Classique figure skates which are in many ways similar to the Freestyle. 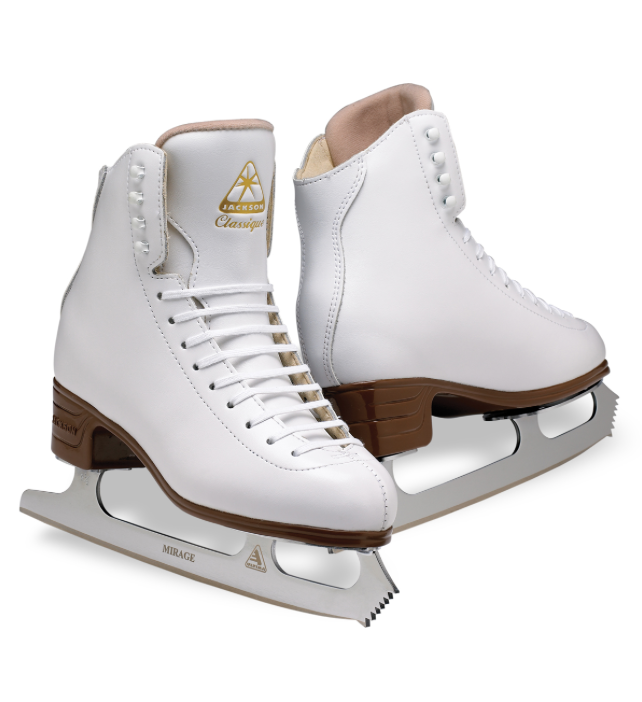 There is nothing quite like seeing the pride with which my children look after their skates. They are keen to restore the beautiful high-shine finish on the blades after they finish skating, which is just great. More importantly, after a lesson of tripping (during which they discovered what it is like to have skates whose blades actually cut into the ice!), they found their ice feet again, so to speak, and started improving rapidly from there. The teachers immediately commented on the difference in their performance with the new skates, which was also reassuring.

To summarize, if the skaters are serious and plan to keep taking lessons, budget for their own skates sooner rather than later.

How Much Should I Spend?

This is the impossible question. The common wisdom appears to be as much as you are comfortable spending. With ice skates, you really do get what you pay for to a large extent. Cheaper (e.g. sub-$100) skates of the kind often found in large sporting goods retailers and department stores are usually considered to be a false economy; the skate will be functional for sure, but often lacks support and does not have a blade capable of handling the jumps and spins that will be asked of it down the line. No problem to use these for recreational skating, but I hear over and over again that they won’t cut it for a developing skater.

In theory, yes of course! Like buying a used car, it’s just a question of knowing what you’re buying, what to look out for, how much sharpening life is left in the blades, and whether the price is fair. It’s also worth considering though that when skates are purchased new, over time they stretch and shape themselves to the owner’s feet. When buying second hand, the skates are already shaped to somebody else’s feet; whether that’s a problem may depend how different your feet are to that person, and how much stretching took place. It might not matter, but it’s something to consider. Overall, I am not in a position to advise on these matters, so I would always use somebody who does know about buying used skates as your ally. Coaches at your local ice rink will likely know of people selling skates (perhaps their own students) and can often advise on what will work.

Have you even been ten-pin bowling before? The house balls are generally pretty chipped, the finger holes never quite fit the fingers properly and are a bit more slippery than is helpful, and the weight is always too heavy or too light. Basically, they’re effective at hitting the pins and it’s possible to do well with them if you can work with their compromises, yet league bowlers typically do not use the house balls; they buy their own. Why? Because then they can get a ball with a more reactive surface; the finger holes are custom drilled to fit the hand size perfectly; finger inserts can be added to add more grip and improve comfort to the holes; the weight can be much more closely aligned with your needs.

It’s the same with ice skates. You can use the rental skates for a while without major issues, but eventually you’ll get to the point where they are holding back your progress on the ice. Eventually, you will have to buy skates or your child will be repeatedly frustrated with their inability to perform the moves requested of them by their coaches.

To coin a phrase, buying your child their own skates will—quite literally—give them the edge they need to keep getting better.