Once I purchased skates for my children, I entered into the fun fun world of accessorizing. Some of the accessories are purely for appearance, but some—like soakers—are absolutely essential for everybody owning a pair of skates. 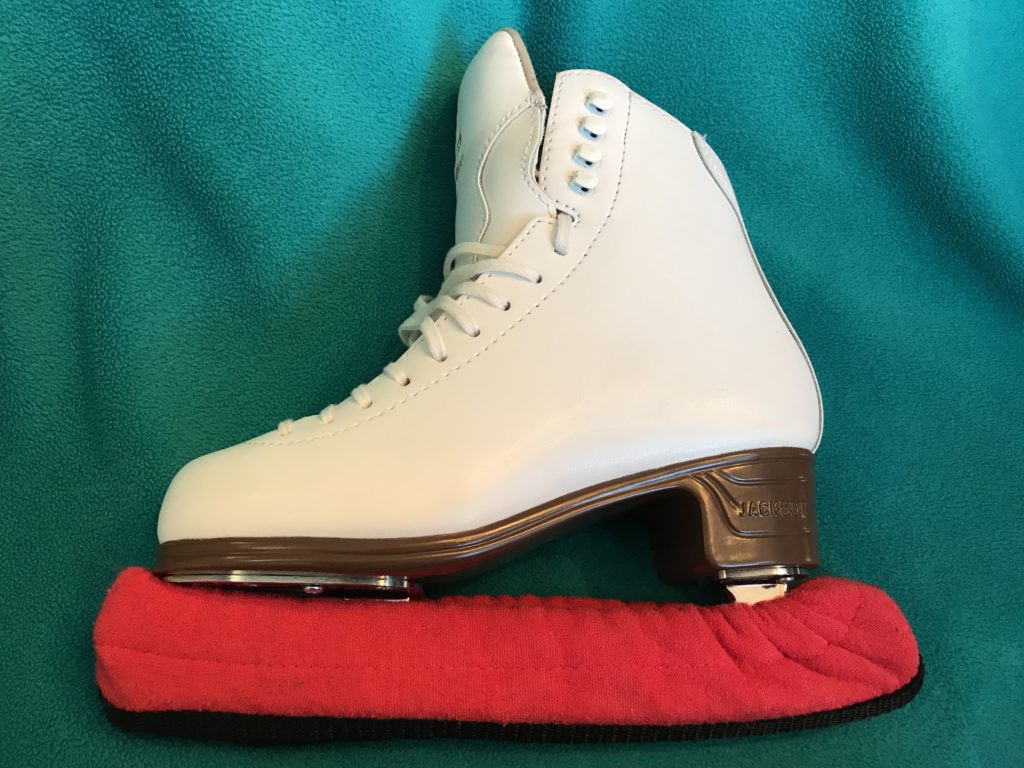 A soaker (also known as a blade cover) does exactly what it says on the tin; its soaks. Specifically, its job is to soak up moisture from the blade once the skate has been taken off, so that it doesn’t hang around and cause rusting (which shortens the blade’s life). You can see a red soaker on the blade of the skate in the picture above. They’re simple and thankfully they’re also very cheap.

How To Use Soakers

When your child finishes skating, they should wipe the blade and the boots (the soles in particular) down with a cloth or towel in order to remove as much moisture as possible. There’s more to this than might at first meet the eye, because the blade has just spent time pressed into ice, so it’s really quite cold by the time the boot comes off. Cold metal is like a magnet for moisture in the air, and consequently even if you dry the blades diligently, more moisture will inevitably accumulate on the cold metal surface of the blade, and if not removed will likely cause rusting.

Once the blade (including the mounting hardware, not just the sharp part) is as dry as possible, put on a soaker. That way if any moisture condenses on to the blade, the soaker will wick it away and let the blade stay dry. This is, therefore, how ice skates should be stored for transport after skating. Should soakers be removed? Well, some people say to leave them on until the next time the skates are used, and others say that once the skate has been inside for a while (i.e. has normalized the blade temperature with the interior), the soakers should be removed so that they themselves can dry. I suspect both are ok so long as the skates aren’t being left inside a moisture-holding sealed bag all the time. The skates need to be dry both inside and out, and if they are left with a damp soaker in a reasonably well-sealed bag, just as a used Gym/P.E. kit will start to mold (UK: mould) and go rank pretty quickly, you can bet that something similar will happen to your beautiful skates. See the page on bags for some examples of skate bags which can help in that regard.

It is of note that in order to minimize condensation on the blades, skates should be stored somewhere relative dry between uses; they shouldn’t be left in a garage or in the trunk (UK: boot) of a car.

How Much Are They?

Cheap, cheap, cheap (from about $6 upwards)! Or expensive. It just depends on your tastes. Here are some examples (click for links to Amazon):

For adults the soakers tend to be one size fits all, but some companies also offer a kids size for smaller skates. It doesn’t matter whether you go for plain soakers or if you splash out on some crazy character blade covers; the point is, if you have skates and don’t have soakers, you need to buy some right now.