In a previous post, I explained how to prepare skates for transit after use (using soakers) so that the blades won’t get rusty. In another, I discussed the use of boot covers as an effective way of protecting the boot from damage while it’s on the ice. But once the skates go into a bag, how can we stop them from scratching each other up as they bang up against each other, and everything else kept in a typical skater’s bag? This post looks at ways to give ice skates protection while in the bag. 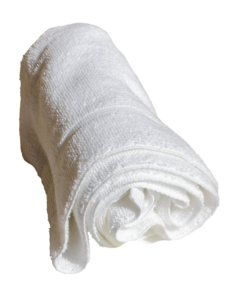 The first thing to consider is whether you have, or can select, a bag which isolates the skates from everything else and preferably from each other. I will discuss bags more in a separate post, but it’s something to consider when evaluating options.

However, assuming that you already have a bag or it’s not possible to find a bag which keeps the skates separate, what can be done?

Cheap, cheerful, effective. Wrap your skates in towels when you’re done and you have a four-way win, even if, perhaps, it looks a little amateurish:

By the way: amateurish, smamateurish. I do not care if somebody thinks I look silly using a towel. If it works and doesn’t have any obvious down sides, why knock it? Sure, buy a towel with an ice skate embroidered into it if you like and if it feels more like something a serious skater might use, but otherwise I would look to grab a couple of plain white towels and put them to good use.

The one negative I can see for towels is that they are somewhat bulky, so will take up space in the skate bag which may be needed for something else. That’s a judgement call for each person.

As a side note, I live in constant fear of heavily colored items leaving dye stains on the lovely white skate boots, and in some cases if you believe the reviews on Amazon and elsewhere, I am right to worry about everything from boot covers to bags and more. Buying / using white towels avoids the whole issue.

If you thought the towels looked silly, try using a couple of old pillowcases. Pillowcases are not as absorbent as towels, so don’t have as much benefit in terms of keeping the boots moisture free (or accelerating the drying process), but most people will be able to find a couple of old pillowcases, and once the skates have been dried off and have soakers on, it’s quick and easy to put each one in its own pillowcase before putting them into the bag.

One thing in favor of pillowcases is that they are very compact; they take up almost no space over and above the volume of the skates themselves.

Pillowcases primarily protect the boots from one another; since they are not as padded as towels, they offer less cushioning against impacts, but using pillowcases is definitely better than using nothing.

I’ve read somewhere (though I forget where now) that you can buy special soft lined pouches in which to put ice skates. When I looked for these online, however, I came up with nothing. Maybe there’s a particular name for them which, if I knew it, would magically generate results. Anyway, I mention them only because somebody said they existed. If you know about them and can point me to a link to some, I’d be delighted to update this post with the information you share!

If you do something different to protect your skates and are willing to share, could you please comment below so I can share it with others here too?

Towels are looking really good right now, aren’t they? With that said, I see many skaters who do not bag or wrap their skates up at all. Currently, the bags my children use have a section on the outside and they can put one skate in each pocket with nothing else in there. However, I’m seriously considering those towels…!

Boot covers are a whimsy; arguably not a skating essential, but I’d put them in the recommended category nonetheless.

What Are Boot Covers?

Boot covers are typically made of a stretchy lycra / spandex / polyester material and are designed to cover the entirety of the boot, from the top of the boot down to just under under the sole (wrapping underneath the foot just enough to hold the cover in place). They’re a pretty simple design, kind of like a soft bootee without a sole on it: 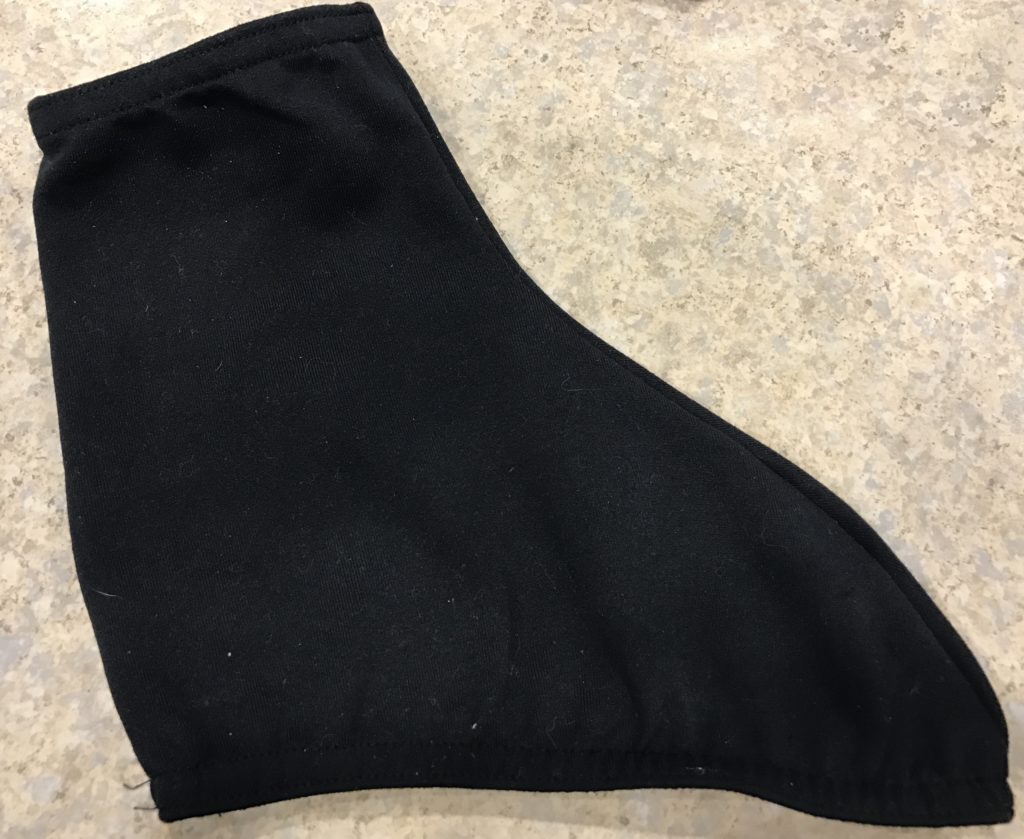 The top and bottom of the boot cover are elasticated so that the cover will hold in place properly: 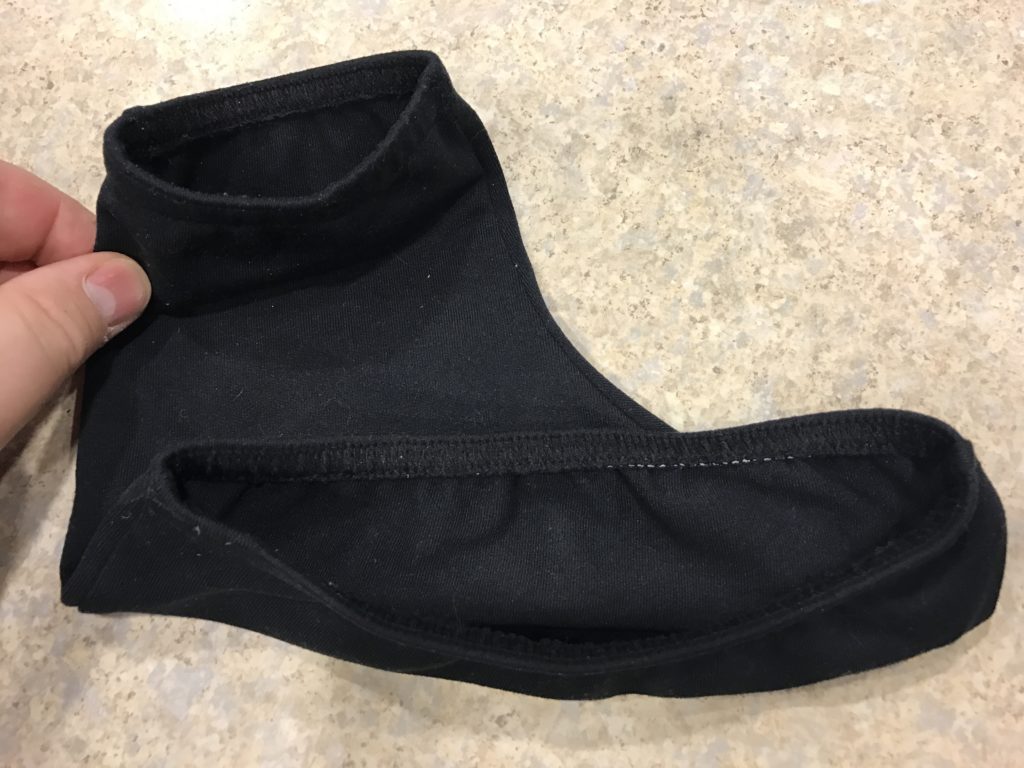 Some people wear boot covers because the wide range of colors and designs available can make the ice skates look prettier or more fashionable, and that’s a very valid reason. My youngest daughter, for example, loves wearing her turquoise boot covers with her turquoise spiral skate pants because by chance, the colors match so well it makes the pants and boots merge in a pretty seamless way: 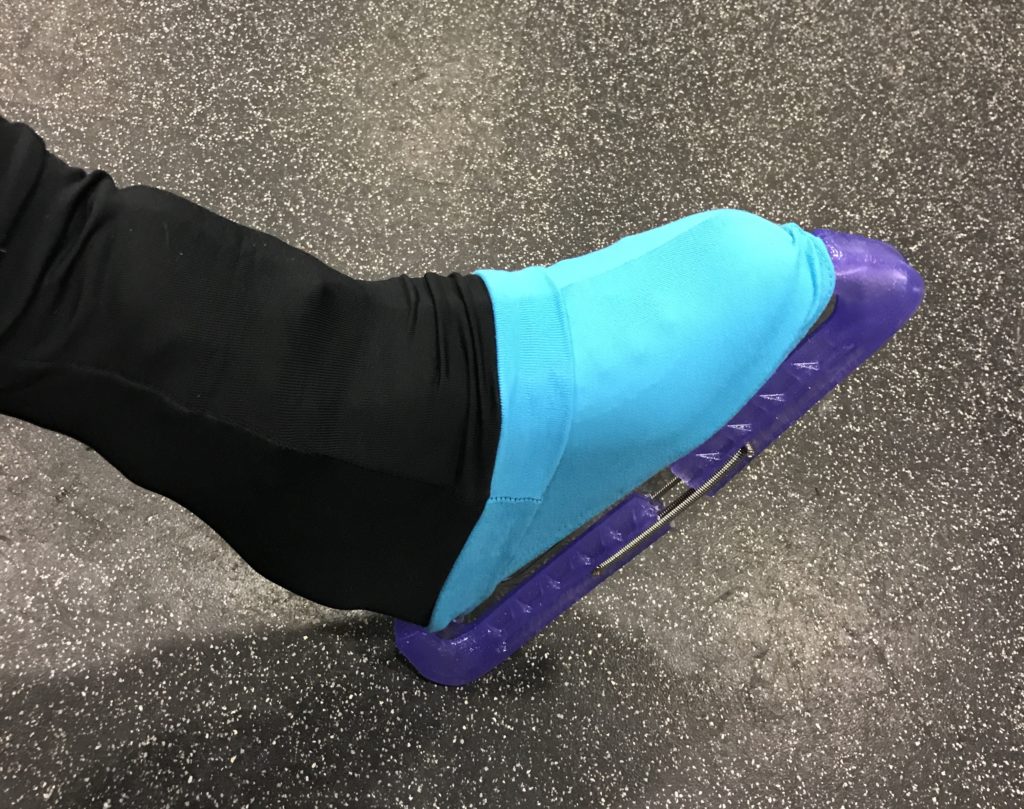 My son wears black boot covers because while most boys / men wear black skates, he has white skates (for reasons I’ll explain in another post); black boot covers normalize his skates’ appearance to the color people seem to expect.

However, the very best reason I know for wearing boot covers is to protect your investment in your ice skates. The ice skate uppers are made of leather, which can get scratched and dinged like any other shoes. Ice can be rough when you scrape your boot along it doing a lunge, for example: 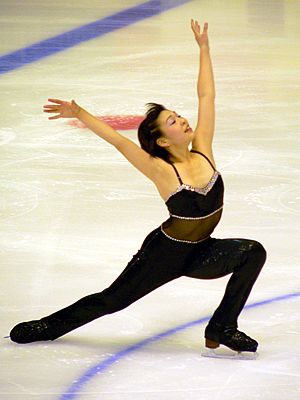 When practicing crossovers, it’s easy to nick one skate with the blade of the other. Scraping against the wall at the side of the ice can damage the leather as well. Rather than try to clean and repair the surface afterwards, it’s much easier to protect it beforehand and minimize the risk of damage. For purely protective purposes, it’s very common to use white boot covers over white boots; it’s not necessary to go with funky colors and patterns if you don’t want to!

One size fits all, they say. I disagree, but apparently I’m in a minority because most covers are at best available in Child (to fit size 1-13) and Adult sizes. Adult, in this case, seems to mean Adult Women based on the fact that Adult in the popular Chloe Noel brand, for example, is Size 1-8. It’s not clear what a boy or man with feet larger than size 8 is supposed to do, because most brands seem to only offer those sizes. As a guide, my 12 year old son wears an adult size 8½ skate, and his “Adult” boot covers only just fit. I am not entirely sure what to do when his feet grow larger, but I’ll cross that bridge when I get to it.

Interestingly, when seeking larger boot covers I did find them for sale in the UK. It seems that the Spanish company Intermezzo manufactures boot covers in an XL size. Sadly I have not found a US distributor for them. Maybe I have just found a new business for myself! I plan to get hold of a pair of all three sizes that they make in the near future and I will report back on the sizing, and whether we can organize some availability in the US going forward.

If the sizing is a pain, in comparison the pricing is a joy. A pair of boot covers in the USA typically runs from ~$10 upwards, depending on brand, color, material or pattern. I’ve linked some examples below, and as ever these are not personal recommendations, just examples of the type of thing available.

For the $10 or so it costs to get a pair of boot covers, my belief is that they will pay for themselves over time, so for me they are highly recommended.

What If I Hate Boot Covers?

Not everybody likes boot covers; I get it. The only way to protect a boot is for it to be protected. Boot-covering tights may provide some protection if you wear those. Similarly I’ve seen some people use tape to protect the most vulnerable areas of the boot. I can’t speak to either of these directly, but the verbal advice I’ve had from the coaches I’ve spoken to has always been to use boot covers.