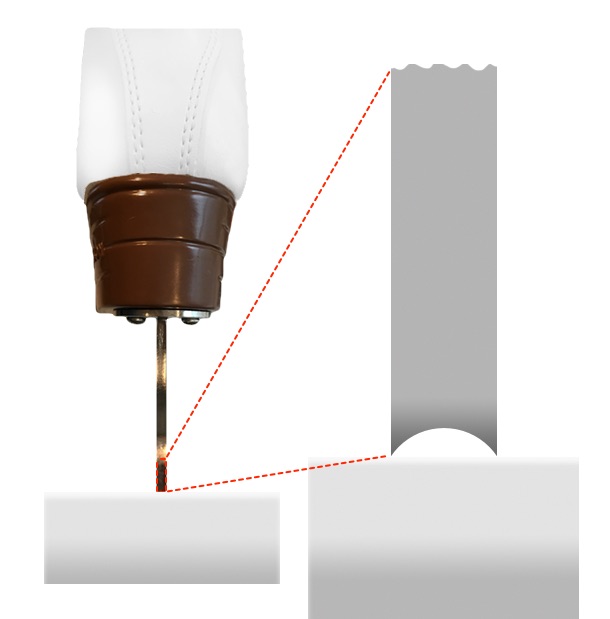 Ice skating blade descriptions often feature a specification called Radius Of Hollow (ROH). Ever wondered what it is?

When blades are manufactured (or sharpened), part of the decision to be made is what ROH to cut into the blade. Typical values for ROH might be between ¼” and 1½”, but more commonly for figure skates you’ll see values from 5/8″ to 7/16″. But what does this all mean?

Somebody who has never looked closely at an ice skating blade might have assumed that the blade surface (the part that is skated on) is flat, so looking at the blade end-on (rather than side-on), one might assume it looks like this: 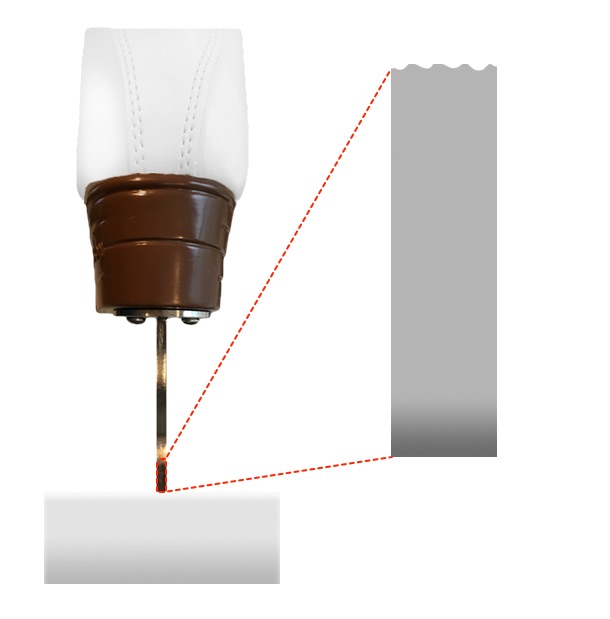 In an ideal world, a perfect skater could (would?) use flat blades. The disadvantages of the flat blade though are that unless the skater were always 100% perfect in their movements, they would likely fall regularly, especially after jumps. Using a non-flat blade surface helps us get better grip and control on the ice, and since we are all terribly imperfect, that’s the norm.

With that in mind, the blade is ground (sharpened) using a curve, creating a kind of arch shape over the ice. This means that the blade actually touches the ice on two rather sharp edges:

The arch creates an empty space between the blade and the ice, and this is what is being referred to as the hollow in Radius of Hollow. As for the radius part, you probably know that a radius is the length from the center of a circle to the outside (i.e. it’s half the diameter, or distance from side to side).

To create the hollow, take a circle with the desired radius, center it horizontally on the blade, then move it until the bottom corners of the blade just touch the circle at those two points. The arc between those points is the curve we want to cut into the blade: 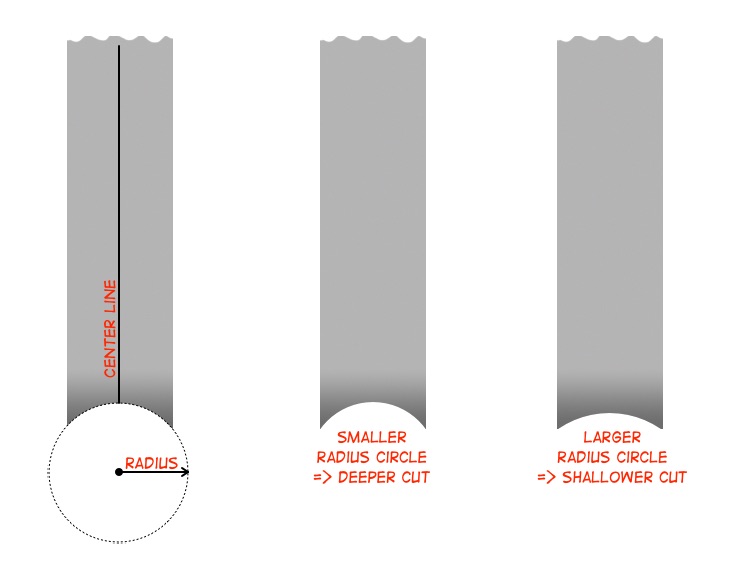 Radius of Hollow (ROH) therefore refers to how deep a hollow is cut into the blade surface, and the value given represents the radius of the imaginary circle from which the hollow’s arc (curve) is taken.

The images above show an exaggerated representation of the ROH on the blades in order that it’s more obvious what’s going on. Drawn at scale, here is a 3/16″ width blade (fairly typical) with four different ROH: 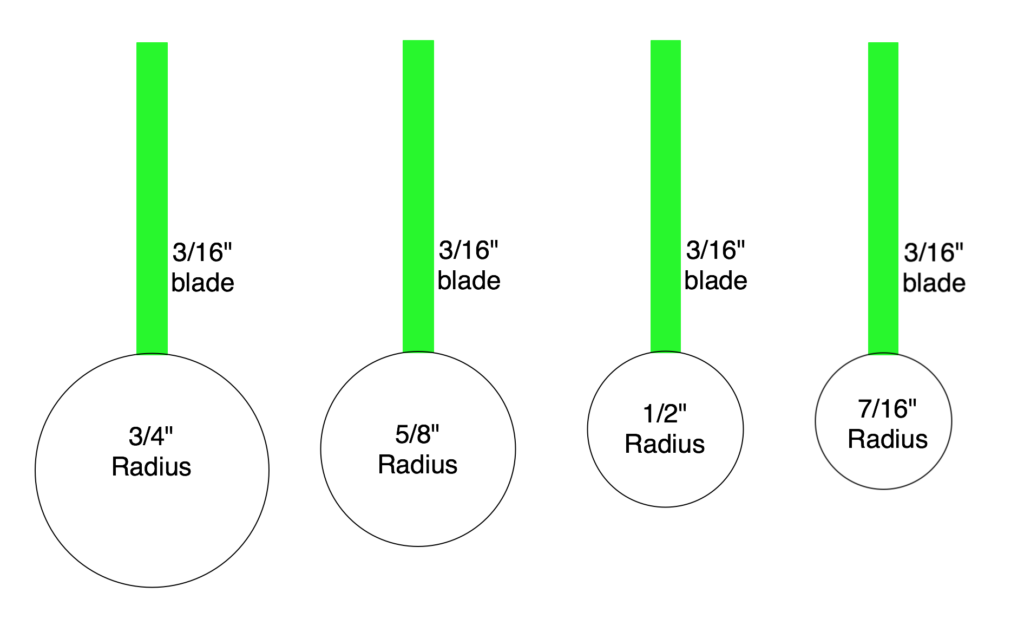 It’s a bit hard to see the difference, so here’s a close up of the same four ROH profiles:

The difference is hopefully visible now, but looking at a skate blade I suspect I would be hard pressed to identify which ROH had been used!

One reason to use a reputable skate technician to sharpen your skates is to ensure that they are capable of aligning the cutting tools very precisely. If the tool is off-center even by a small amount, the results can be anywhere from irritating to disastrous: 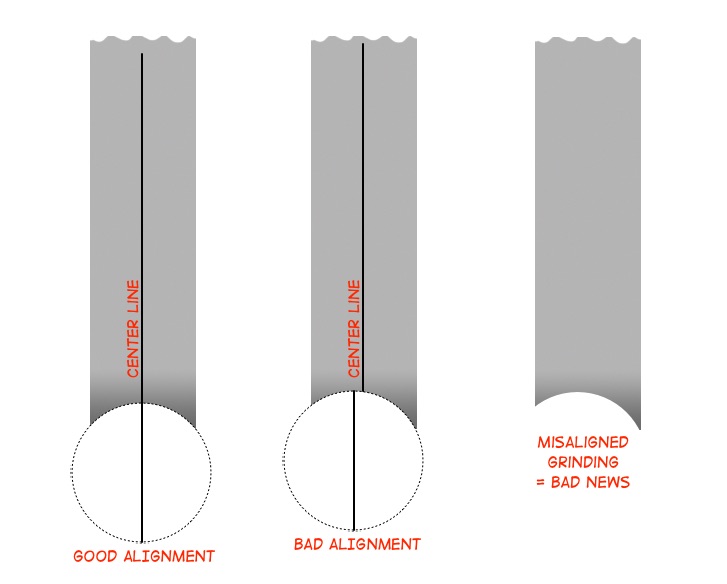 Trying to skate on misaligned edges like those shown above would be virtually impossible.

What ROH Should I Use?

Choosing a ROH is a matter of personal preference and, sadly, trial and error. There’s not really a magic formula to determine which will be best for an individual, as a number of factors can influence that decision. A radius of hollow around 5/8″ is a fairly typical place to start, sitting roughly in the middle of the usual ROH range.

Typically, the better the skater, the larger ROH they will use. To that end, one way to determine the shallowest possible ROH for your skater would be to increase the ROH each time the skates are sharpened, and then when an ROH is reached where skating becomes too difficult, back off to the previous ROH. It’s not a hard and fast rule, but it’s a start.

A larger Radius of Hollow (shallower / flatter hollow) gives slightly less control and less tight turns, because the edges cut into the ice less than a deeper hollow would do. On the up side, the flatter hollow glides well and can (subjectively) make the skater look a little more fluid on the ice as a result.

A smaller Radius of Hollow typically gives more control and tighter turns (because the deep hollow means that the edges cut into the ice more) and as a result the blades are more forgiving of the skater’s form, especially where landings are concerned. Small ROH means more bite, but also means the skates will glide less well, and it may take a bit more effort to skate as a result. One final point is that the marginally sharper edges with a deeper hollow mean that the blades can apparently be more prone to chipping.

Weight is a really important factor to take into account because it alters the effectiveness of the hollow quite significantly. Heavier skaters will need to use a larger ROH (i.e. a shallower hollow) because their additional weight will force the blades into the ice harder and allow them to cut in effectively despite a relatively shallow hollow. Cut a deep hollow on skates for a heavy skater and they may find that their weight pushes the edges into the ice so deeply that they can’t stop properly, trip over themselves or have difficulty turning. Too much ‘edge’ can be as bad as too little edge in this case.

A lighter skater in comparison will generally need a smaller ROH to get better control because they don’t push the skates down as hard and the extra depth creates more angular edges which will cut into the ice more effectively.

Believe it or not, the temperature of the ice also plays a part in the effectiveness of the ROH choice. Colder ice is firmer which prevents the edges from cutting in quite as much as they would on warmer ice; therefore a colder ice rink may require a deeper hollow on the blades (smaller ROH) to get similar bite to a larger ROH on a warmer rink. This is something a little more out of the skater’s control, unfortunately, but it’s worth knowing about nonetheless.

One Reply to “Blades: Radius Of Hollow (ROH)”